Whew!  It was a busy day in the Windy City and I am bushed.  You might even say winded?  Sorry.  The first day of Ignite was chock a block of interesting information, new announcements, and poignant insights.  I’ll do my best to provide a summary, and maybe even some pics.  Read past the break for more. 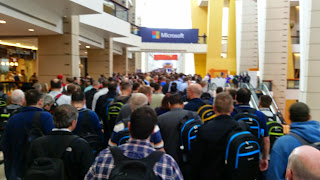 The morning started with a Keynote from Satya Nadella.  The central premise of the presentation and the driving goals for Microsoft are to: 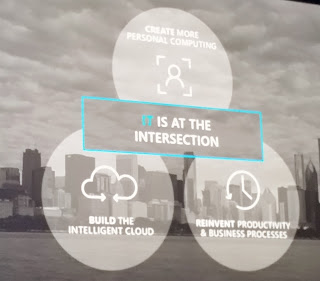 To elaborate on the first goal, Joe Belfiore took the stage and gave a lively demo of Windows 10.  He told us that his mission was to turn us into evangelists for Windows 10.  I’m already a fan, but telling me I have to evangelize it to end users may be a bridge too far.  Let’s see how that product stacks up on its own merits before I go tell it on the mountain.  There was some good information in his section.  The new Edge browser (yes that’s the name of Code Spartan) was on display and it has a lot of nice new features.  Honestly, it isn’t anything you couldn’t do today with Firefox or Chrome and the right combination of plug-ins.  But the browser looks to be a definite improvement over IE, and that makes me smile.  Some of the main items I took notice of were:
The next piece of the demo was Continuum.  The strategy is in line with another main point that was made repeatedly during the first day.  t is the user who is mobile, not the device.  And their experience needs to be consistent across all the devices and form factors they might use throughout the day.  That includes moving from a phone to a PC to a tablet, and also the conversion of a 2-in-1 from PC mode to tablet mode.  Continuum is their plan to provide that unified experience using the power of Universal apps and Windows 10 on the phone and PC.  The demo was very slick, with Joe moving from one device to another seamlessly.
The next demo was meant to show the new security features in Windows 10.  Called Windows Hello, Joe was able to unlock his PC using facial recognition and the attached webcam.  The system can also tie into a two-factor authentication system, utilizing a mobile device app or phone call as the second factor.  The point is to make security simpler for the end user; to delight them, as Joe liked saying.  If you think security can delight the end user that is.
Joe’s final demos were about Cortana and the new capabilities Cortana has in regards to searching local files, giving advice on using Windows, and polling BI data from spoken queries.  The last one seemed powerful if executed properly, but I wanted to see the capability for query refinement after the search is executed.  That’s probably coming up in the next build.
After Joe, Gurdeep Pall took the stage to delve into the second main point, reinventing business processes.  He spoke about the shift of old IT into new IT, mainly about how IT needs to be used not to deliver information technology but to drive ingenuity. 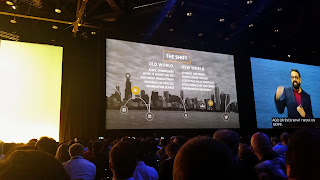 There were a lot of buzz words used during the presentation, but I think the main point was that IT can be used to vastly transform outdated business processes and productivity.  That’s not exactly news to anyone familiar with IT over the past 25 years.  The more important point that he made was the way in which Millennials think about work.  He said that for Millennials, work is about what you do not where you do it.  They expect to be able to collaborate and communicate in real-time, and be able to form amorphous groups to tackle new tasks.  At the same time, baby boomers are retiring at a prodigious rate.  So the old guard is moving on out, and the Millennials are moving in.  If we as IT want to enable their productivity, then our technology needs to match the way they are accustomed to working.
Gurdeep went into a few demos, but nothing too earth shattering.  There was Delve, Sway, the Surface Hub, and Hololens.  The Hololens seems particularly a work in progress.  This is not the first time we’ve tried virtual reality with goggles, and I don’t know if this is the one that succeeds.  In a way I equate VR goggles to tablets.  It wasn’t until the iPad came along that tablets stood a chance, and that was probably because the hardware, software, and consumer were finally all ready. Are VR goggles at that point?  Not sure.  I guess, much like cooking spaghetti, they just have to keep throwing it against a wall and see when it sticks.
Finally, Brad Anderson got on stage to talk about the third big goal, which was to create a more intelligent cloud.  This is when my ears perked up because I had been hearing ru
mors about Nano server and Azure Stack.  Sure enough, Azure Stack has been officially announced and you can sign up right now to try it. 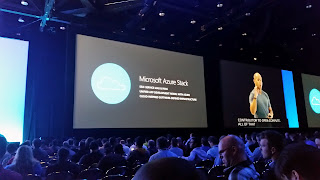 In order to build a more intelligent cloud he brought up four points.  An intelligent cloud must be:
The Trustworthy point is all about security.  To that end he went into a long discussion of defense in depth covering devices, apps, files, and identity.  The important items to note in the presentation were Device Guard for devices, mobile application management for Microsoft apps, Rights Management for files, and on-premise Active Directory leveraging Azure AD for identity.
The Flexible point was all about the Azure stack and the ability to seamlessly move workloads, templates, and services from a local instance of Azure to the public cloud.  He also talked about the ability to stretch database tables from a local instance of SQL 2016 to and Azure instance, which seems pretty cool.
Integrated seems to be about the newly announced Microsoft Operations Management Suite, which they are calling OMS, but I think I’ll call in MOMs for fun.  MOMs is built to monitor your hybrid environment, including public cloud providers like Azure, AWS, and Rackspace.  MOMs has the ability to collect logs from disparate sources and then perform analytics on those logs to find correlations and potential issues.  In a way it reminded me of a combination of vRealize Operations Manager and Splunk rolled together.  It’s a cloud offering, and it can either supplement or replace your existing System Center Operations Manager deployment.  The fact that it can monitor a lot of the existing public cloud providers and aggregate the data together seems like a big win to me.  I don’t know of another product that does this today. 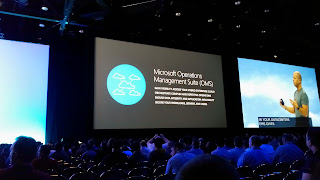 The Intelligent bullet point was sort of left out in the cold, but I think there’s enough intelligence in the rest of the points to make up for the fact that it was not specifically called out.
And that was the end of a 3 hour keynote.
The thing I am most excited about is probably Azure Stack.  I spent the remainder of the day attending sessions focused around Azure Stack, and I plan to do the same tomorrow.  That is going to warrant it’s own post, so I won’t go into excruciating details on this one.
TL;DR?
Here are the major announcements:
Keep you eyes peeled for Day 2!  Follow me on Twitter @ned1313.  I’ll be using #Ignite2015 for my tweets.

Who Bot: A Hidden Gem in Microsoft Teams

Advantages of Azure Automation – Part I

Top Citrix troubleshooting tools that will save you a lot of headaches!

Best Practices for supporting iOS 7 and 8