HP StoreOnce B6200 and Catalyst

At HP Discover last week, HP made some significant announcements to their DeDuplication series, D2D.  Specifically, announcements were made around the integration of EMC “DD Boost” like technology, the HP Catalyst.  HP Catalyst is a SW component that provides similar functionality to EMC’s DD Boost, but also provide client-side DeDupe capabilities, similar to EMC’s Avamar.  The Big difference – the DeDupe algorithms are common and shared.  Also, HP Catalyst at launch will support Symantec NetBackup, with Symante BackupExec to quickly follow.

EMC made announcements around their Data Domain line, specifically the DD990, which promised increased scalability and performance – when utilized with DD Boost and OST.  Additional announcement about EMC Networker version 8 and client direct backups were also revealed, so we will need to look at benchmark results for this new functionality as an update to this post.

As a long-time supporter and reseller of Data Domain and an HP reseller that was “burned” by the original launch of HP StoreOnce 4300 series more than a year ago, the launch of the B6200 was met with some suspicion.  From a recent whitepaper from the Evaluator Group, here are the comparative metrics:

When you look at the per node comparison, the DD990 is still much higher than any of the other per node ingestion rate performance of the competitive solution, including B6200.  However, where the B6200 wins is the ability to scale multiple nodes with a shared dedupe catalog.  This means that its overall Dedupe Ratios should be better than if you were to horizontally scale with multiple DD990s, since the dedupe catalogs, in this instance, would all be independent.

Two additional keys are HA and A/A failover.  Only the B6200 provides A/A data access across multiple in-line dedupe controllers with access to ALL DATA during node failure.  If you integrate it into HP Data Protector, you can also automate the restart of backup jobs after controller failure.

HP Catalyst itself is what really makes the B6200 perform, similar to how EMC’s DD Boost provides performance benefit to Data Domain.  HP’s Catalyst, however, is not limited to Symantec OST only – it provides client-side dedupe access to application-direct copies as well – all in one standard dedupe format (client or target).

Looking at the design of the B6200, you can see the integration of acquired HP technologies at work.  HP’s acquisition of Ibrix (now referred to as their X9000 NAS line) shows many similarities to the architectural design of the B6200.  However, the federation of the node couplet design does limit the number of backup specifications that can be handled by one node pair, which can ultimately limit scaling. 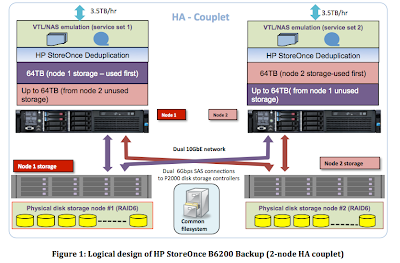 While the Evaluator Group’s report does paint the HP B6200 in a great light (as does a similar comparison conducted by Edison Group), I still have some skepticism.  We have a couple of B6200 POCs that are in the works, so until I see in action personally….  In any case, while the B6200 looks good, for most mid-size businesses, the updates to the Data Domain line are well served.  Further, in single node-pair configurations, the DD990 looks to be an excellent choice.

What is Consumption-Based IT?

Guide to Transforming Your IT Storage