Deploying VMware Photon on Vagrant and Installing docker-compose
You might have already heard about Photon, the new operating system from VMWare that is intended to run containers.  The intention is for Photon to be installed on physical hardware, and then let vSphere manage the deployment and configuration of containers running on your Photon servers.  VMware has already released some beta versions, and you might be interested in deploying it to check things out.  After the jump I’ll show you how to quickly get up and running using vagrant and VirtualBox.

Even though Photon is intended to be deployed to physical hardware, there’s no reason you can’t test it out on virtual hardware.  My recommendation is to use vagrant to do this.  If you aren’t familiar with vagrant, it is in many ways docker for VMs.  You build a configuration file (Vagrantfile instead of Dockerfile) and use it to rapidly deploy one or more VMs to an environment.  Vagrant can deploy to number of different providers, including VirtualBox, VMware, and Hyper-V.  There are some limitations.  The VMware plugin is not free, and the Hyper-V plugin cannot perform a lot of the internal VM tasks like setting IP addresses.  Due to those limitations, my provider of choice is VirtualBox.  The downside is that I can’t take my Vagrantfile and deploy it to a vSphere environment.  But I don’t need to.

Before you move any further, you’ll need the following software installed to play along at home: Git, vagrant, and VirtualBox.  I am using Windows, since Microsoft hearts Linux, but you could do this in Linux too.
First step is to clone the current Photon git repository.  Run “git clone https://github.com/hashicorp/photon-vagrant.git” from the command line.  It will create a copy of the project locally in your present working directory, so I recommend navigating to the parent directory you would like it created in.

As you can see the directory has been created and it has one file: Vagrantfile.  If you want to jump right in, simply issue the command “vagrant up” and vagrant will take over.  The most current image is pulled down from hashicorp and then deployed as a VM using a headless instance of VirtualBox. 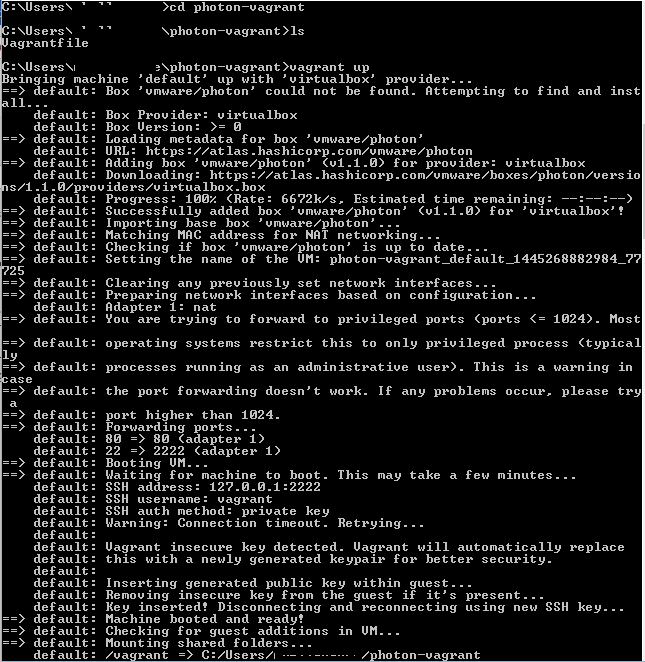 Once the VM is up and running, you can connect to the VM using the command “vagrant ssh”.  Since there is only a single VM in the Vagrantfile, you do not need to specify what machine to connect to.  The connection logs you in as the vagrant user, but you can execute sudo or switch to root, as I have done below. 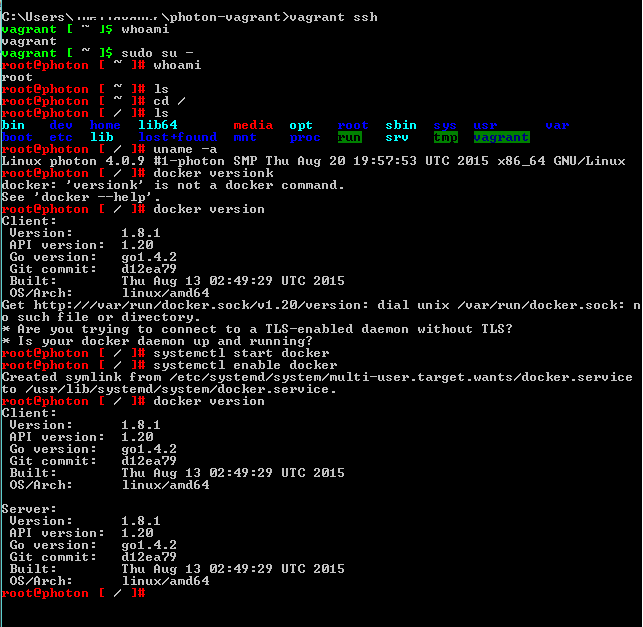 By default the Photon image does not have the docker daemon running, so you will need to use systemctl to get it started.  Run “systemctl start docker” to get the daemon running.  If you would like it to start at boot, run “systemctl enable docker”.  The version of docker pre-installed is 1.8.1 with the image I used.  Your mileage may vary depending on the most current image online.  I have found that the docker daemon will not start if there are multiple NICs in the VM.  I am working on determining the root cause, but I am betting it is a bug in Photon.
To run a basic container, I executed “docker run busybox echo hello!”.  The command will stand up a simple container and run the command “echo hello!” from the shell.  Then it exits the container.

I also wanted to see if docker-compose was working on Photon, so I pulled down the latest version from github.  You can grab the latest release here.  As you can see below, docker-compose installed and reported back its current version.

Vagrant sets up a shared directory by default so that files can be easily accessed from within the VM.  The internal mount point is /vagrant, which is mapped to the folder containing the Vagrantfile.  I dropped a docker-compose project for WordPress in there and navigated to it within the VM.  Then I ran “docker-compose up –d” and amazingly the whole thing started!

I had to create a NAT rule to access the WordPress page on port 8080 from my host machine.  Once I did that, I navigated to ://localhost and got this page.  Included below are the Vagrantfile and docker-compose.yml files I used for the example. 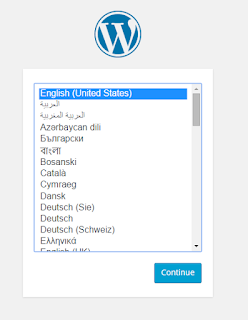 Installing an Old Client on a New CommServe for Simpana