In case you were wondering what donut and pie charts have in common, it is that neither is a very good form of data visualization. Let’s run through some of the common problems.  In the pie charts above, which is more, the grey slice or the blue slice?  Which shade of blue you ask?  The one opposite the grey will be a greater challenge. So let’s go with that.  Now, how much is that difference, if there is any?  Lastly, consider the same for the donut chart. Is the donut chart easier or more difficult to see the difference?
Hover over the image above and you will see the answer to these questions. The unhappy donut chart was made from the same source as the pie chart. Pie charts may represent the share of a whole, fairly intuitively, but they are lacking tools for analysis because it is difficult to calculate differences in area when compared to other forms of visualization. It takes time to interpret them and sometimes they can lead to the wrong conclusion, entirely.

So why bother with a chart at all?  Why not just list the data out in a table like this (which was used to make the pie chart): 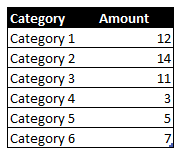 Charts can offer an immediate understanding of the data without having to read each and every value. In fact, reading a table is far slower than reading a pie chart. So it’s got one up on that, anyway.  But let’s take the table above and convert it to a bar chart.  I’ll match the colors to the pie chart so we can compare the grey and blue slices again: 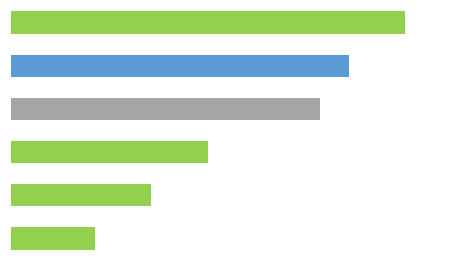 It is now quite a bit easier to see how these categories line up and what the difference is between them.  Part of the reason why we can read charts so quickly is because we are visual by nature.  Many studies of data visualization have focused on preattentive attributes, these are characteristics that can be interpreted before conscious thought with a sub-second response before it is stored in short term memory.  Less than 250ms is a common benchmark for considering an attribute to be preattentive. Some of these attributes are:
So, for example, when you look at a pie chart, you preattentively process the differences in color and shade (hue and saturation). It is easy to tell one slice from another. And that’s about it. Comparing the size of one triangle to the next is more difficult and less accurate than comparing lengths as we saw in the bar chart.  Area is not preattentive, while line length is.  Let’s do another exercise – what is the difference between the circles below?  Hover over to see.

Now, let’s try this comparison using length. What is the difference in line lengths below?

That’s right, they are the same as the circles, but it is far easier to see.  Again, comparing sizes in shape is much more difficult than line length.  This is just the way the human eye works.  Some preattentive attributes are better at encoding numeric values than others.  This is why we can safely say, there is always a better choice than a pie chart.  When we make the decision about how to create a report, we can lean on those attributes that work better for the task at hand.  Shape is a great way to distinguish groups, as in a scatter plot.  Line length and 2d position are great ways to display numeric values, as in bar, column and line charts.  And pie charts are a great tool for demoing challenges in data visualization 🙂
m

How to install Active Directory Cmdlets in Powershell